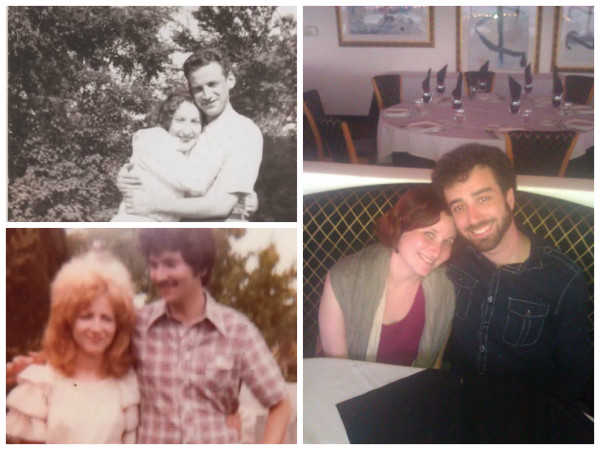 My mom had just gotten home from a trip when she heard the phone ring. She’d been in Los Angeles meeting my dad’s family for the first time, and it was my dad on the phone checking in to make sure she got home safe. In addition, he was also wondering if maybe she’d be interested in marrying him.

She was, actually. Even though he was asking her over the phone mere hours after they’d been in each other’s physical presence. Even though she didn’t get a bended-knee proposal and couldn’t excitedly hug him for a little while, she still wanted to marry him.

He’d been thinking about asking her for a little while, but it was his grandmother who gave him that extra push. After my mom left, my dad’s grandmother said, “I like her. You should marry her.”

Now, he could have had that moment of revelation and then waited to ask her in person. But there’s another reason he asked her over the phone. If my mom said no he could just get off the phone afterward.

And those are some reasons to ask a person to marry you over the phone.

Hey, it was better than not asking, my dad pointed out, and he’s quite right about that. After all, I wouldn’t exist if he hadn’t asked.

Apparently, ehem, I would.

It wasn’t my fault though! My soon-to-be fiancé, Joey, and I were on the phone talking about his upcoming visit the following week, when all of a sudden he said he wanted to ask me an important question in person. A question he couldn’t ask me over the phone.

We had already talked about the other big things. We had said we loved each other and wanted to live together, so there was really only one important question left. Basically he had just announced he was going to propose to me in a week.

That is absolutely not how a proposal works! You either propose or you don’t propose. You don’t leave people in proposal purgatory.

Less than a minute later, I had a fiancé that I couldn’t hug or kiss for another week.

My mom always said I should learn to be more patient. Come to think of it, she said the same thing to my dad sometimes.

While the similarities might seem obvious, I didn’t make a connection between the proposals for years. I was too busy focusing on the differences.

For instance, my dad was 23 and my mom was 24 when they got engaged. By that point, they had been dating for about a year. In contrast, I was 19 and Joey was 20. And did I mention that we had only known each other for a month?

Before I explain, I’d like to point out that Joey and I have been married for over a decade now. So no matter how crazy we may seem in the story below, just remember we’re still together today.

Joey and I met through friends the summer before our junior year of college. A group of us were all meeting at one house and carpooling to Venice Beach in a SUV. Joey wasn’t even supposed to go but when an extra row of seats refused to go in, someone remembered Joey’s mom had a Suburban. At first he wasn’t sure he’d be able to make it because he was supposed to pick up his dad at the airport, but at the last minute his dad decided to take a later flight.

We talked a lot at the beach and the Thai restaurant we went to afterwards. Over the course of the day, he went from being the short skinny guy with the big Suburban, to the kind of annoying argumentative guy, to the guy with the pretty eyes. (Instead of telling him he had pretty eyes, I chickened out and told him he had long eyelashes.) 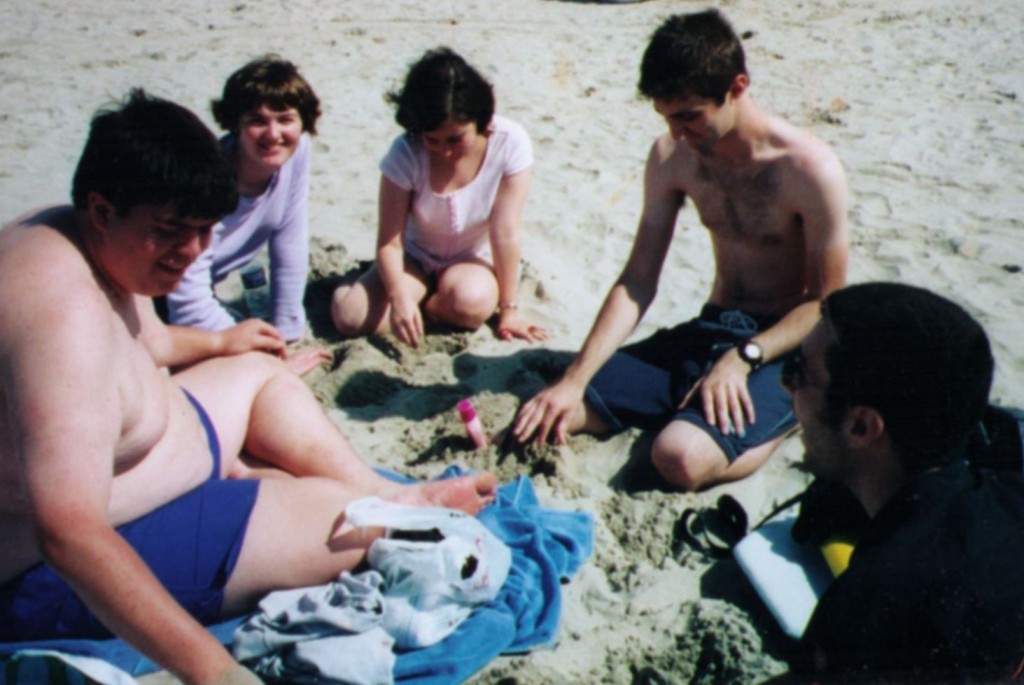 Picture from the day we met

Back at our starting point, Joey offered to drive me home even though my friend had driven me there and my house was completely out of the way. During the ride, he told me stories about his life, and my perception of him changed again. I thought for sure he was going to try to kiss me when we got to my house (at least, that’s what I was hoping he would do), but he didn’t even ask for my phone number. That really confused me.

We got together as a group a couple more times over the next three weeks. Joey and I usually ended up gravitating toward each other, spending most of the time talking alone. The last time we all hung out was the day before my family’s annual summer trip to Mammoth Mountains. After that, I’d be heading off to the Netherlands to study abroad for a semester, and Joey was going back to school in Florida.

We both admitted we liked each other and agreed to write. At one point, I stopped him mid-sentence to kiss him. He was so thrown off by this that he just smiled into the kiss, not kissing me back. (He was actually probably more thrown off by the fact that he had planned to kiss me at my front door. Sometimes he needs a little time to regroup when his plans change.)

We wrote letters, emails and talked on the phone. We’d talk for hours and hours. He said he loved me, I said I loved him, we got engaged. He flew out to visit me and we spent the weekend in Paris. 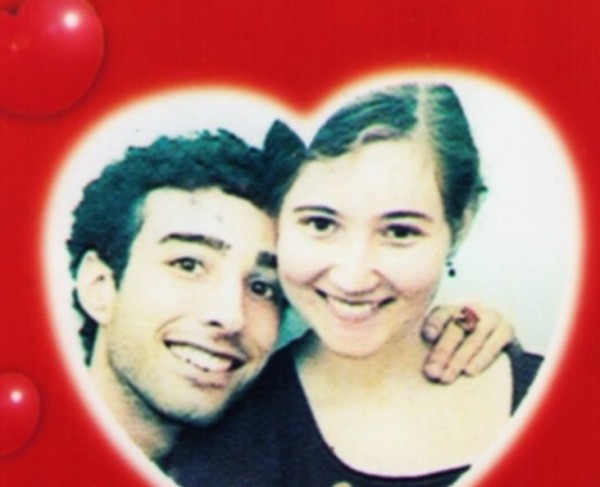 Taken in a photo booth in a Paris train station

He waited until he was back in Florida to tell his parents we were engaged. By that point, we’d known each other about a month and a half and had been a couple for three weeks.

I waited a few more weeks to tell my parents because then I could at least say Joey and I had been together for two months. Sadly, that extra month didn’t make me sound as mature and responsible as I’d hoped. Needless to say, they didn’t take it very well.

From then on, it was an endless stream of wedding planning and people trying to talk me out of getting married. One of the only people who didn’t object was my grandmother. She said she really couldn’t say anything bad about it because she and Grandpa had gotten married pretty quickly too.

She didn’t give me the details, but the old love letters I found years later filled in the blanks. Turns out they had only been together about three months when they got engaged, and eight months when they married. She was 22 and he was 24.

Too bad I didn’t know all that back when everyone was telling me I was crazy. It might have helped my case. (To be fair to all my naysayers, when I realized that my grandparents had only known each other eight months when they got married, my first thought was, “Wow, isn’t that a little fast?”)

We made it down the aisle despite all the hubbub. We got married on August 5, 2002, exactly a year after we met. (Unfortunately for all our guests, we met on a Sunday, so our wedding was on a Monday night. By that point, I was so immune to everyone’s grumblings that I didn’t care if anyone complained.) 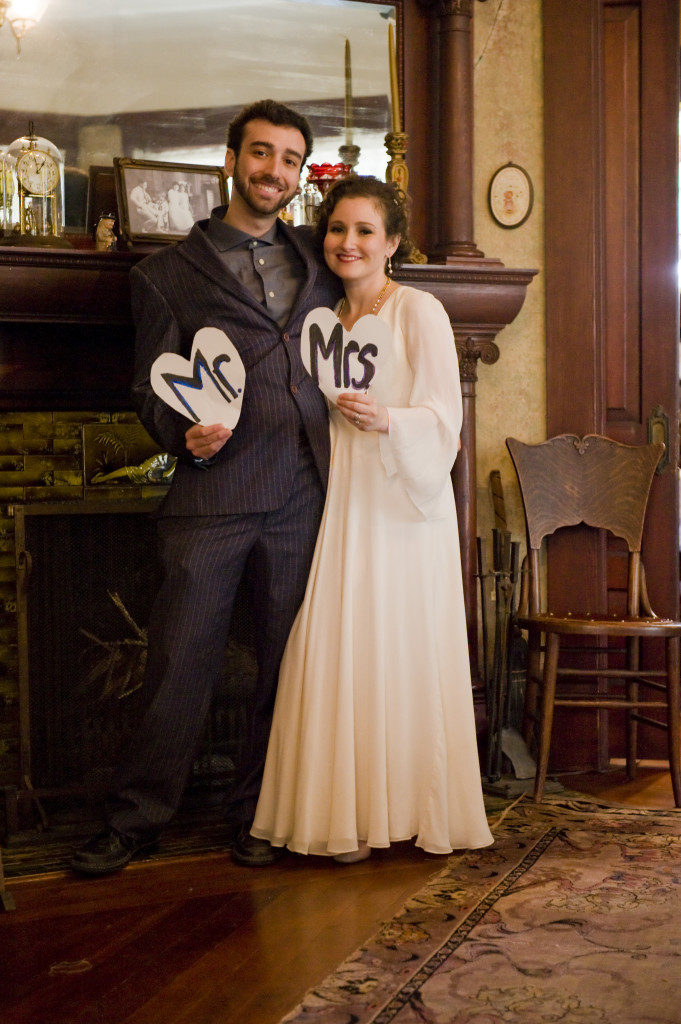