Getting To Know You

In early 1951, my specialist training in internal medicine came to an abrupt stop. The army wanted me. They had paid for my education and it was time for me to uphold my end of the bargain.

I was seized with mixed emotions. One moment I convinced myself the experience would be good for me; the next instant I didn’t dare contemplate the future.

Then I had an inspiration. My wife Ruthie and I had already agreed to write frequently. In addition, I asked that she placed each of my letters in a loose leaf book immediately after reading them.

I warned her that I was going to write minutely, accurately, truthfully. If I felt irritable, disgusted, hopeful, happy—no matter what—I was going to jot it down, and someday posterity might read about me, my strengths, weaknesses, foibles.

True to my word, I wrote every day, and in that time I accumulated at least 1,000 pages of my innermost thoughts. Call it a diary, if you like. I fought a constant battle against boredom and anxiety. I dealt with many subjects, some of them nonsensical, many trivial, others heartrending, all of them composed of the stuff that confronts our lives daily.

-Introduction from Dearest Ruthie: Letters Written to my Wife During the Korean Conflict

Within the last five years I’ve switched careers (from journalist to personal historian), become interested in family history, organized several genealogical trips, discovered previously unknown relatives, gathered new family photos and stories, and gotten to know myself better. At the heart of all this sits my grandfather’s Korean War memoir.

It’s been a series of slow realizations ever since I read it. Initially I was just glad that I had another chance to get to know my grandfather, who had recently passed away. But as I became more immersed in his voice, I began to see his Korean War memoir as a part of several larger stories.

The most obvious is his personal war story as a representation of the overall Korean War experience. His tales, from the patients he treated (most often for venereal diseases, though there were some with serious injuries) and the dangers he encountered (driving through minefields in the dark) to his determination to find joy in the little things (a good meal, books, letters from my grandmother, a week of R&R in Japan) even amidst overwhelming boredom, all hint at the bigger picture.

Beyond the Korean War, it was a snapshot of my grandfather as a young man. This Sidney Goldstein wasn’t just my grandfather; he was a peer in the same stretch of life. So it was easy to identify with his enthusiasm, curiosity and impatience.

What surprised me was how much of myself I saw in him. How alike our observations, opinions, and worries were. How similarly our thoughts were structured and our writing voices crafted—all things that I thought were singularly unique to me. Knowing that I shared these things with my grandfather made me feel closer to him, and less alone.

It was this mini epiphany that started me on my current trajectory. I fell in love with people’s personal stories and family histories. I became a personal historian so I could help other people save their life stories. And just this last year, I decided to take a broader look at my family tree.

The information I gathered on distant relatives (all descended from the same two ancestors) through visits, research and an extensive 30-page family tree, had me thinking about the traits we pass down, whether genetically or environmentally, and the qualities that we only find in ourselves. 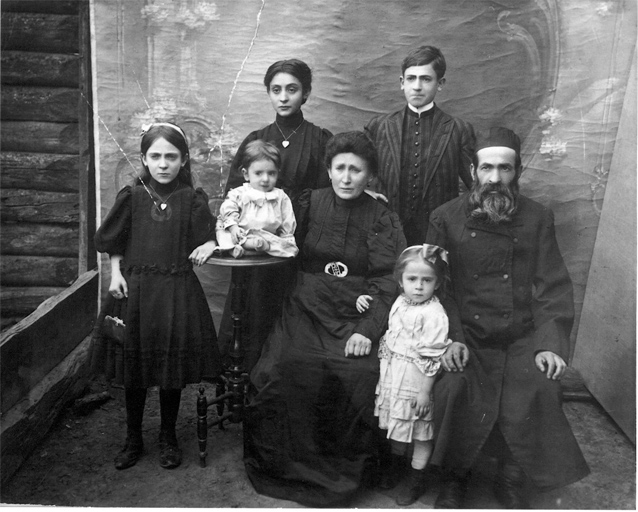 The ancestors my relatives and I descended from, the Goldstein family in the Old Country.

In my family, there are a lot of doctors and writers. Quite a few play instruments. Some speak fast, some are religious, some are worriers, some travel a lot.

What’s the point? Well, eventually, I plan to make a big family history book. But mainly it’s about getting to know the history as it relates to me and the other Goldstein descendants. Or put another way, the more we know about our origins, the better we can understand ourselves. And that sounds pretty good to me.

Posted on December 20, 2012 by Rachael. This entry was posted in Korean War Memoir. Bookmark the permalink.

A nice revamping of Sandbox theme for Wordpress